Our Family & Other Animals - the details 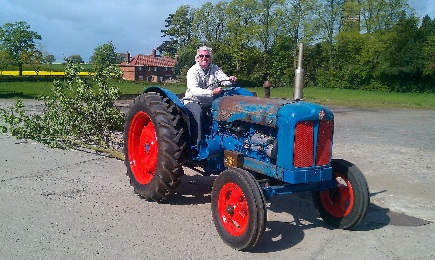 Ken is from Cork in Southern Ireland moving to the UK in 2000 to work as an Aircraft maintenance engineer for Virgin Atlantic. He has a passion for aeroplanes, and had his pilot’s licence before he had his driving licence. His dream was to fly cargo planes but unfortunately he had an accident which punctured his lung so he failed his medical. He then worked in his father’s company as a coach builder before turning back to his true love of Aircraft. He has 2 grown up daughters and 3 beautiful grandchildren living in Ireland. 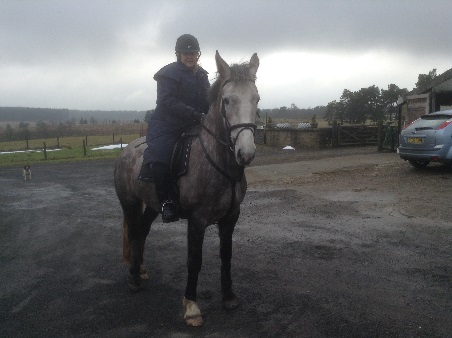 I am a local girl brought up in Brunswick village on the outskirts of Newcastle upon Tyne.  An accountant by profession working both in Practise and Industry.  Recently giving up the stressful job of working for a Global company as a Financial Controller for the simpler life in the country.  I now have a small accounting practise which I run alongside the Bed & Breakfast. I have a great love of all animals and am always rescuing abandoned and injured animals. I have one  daughter and 2 beautiful grandchildren living in North Yorkshire. 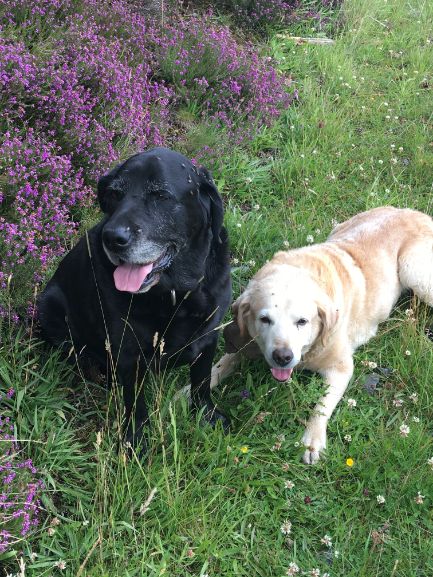 We bought Black Billy as a 2 year old following seeing an advert at the local vets.  He was living with an elderly couple in an upstairs flat with no garden.  He was showered with love and food (so far too fat) but had never been let off the lead and his owners were unable to give him the exercise that he needed.  It broke their hearts to let him go but they knew this is the right thing to do for Billy.  When we first got him he pulled like a steam train on the lead, but he was soon enjoying his new found freedom of running off the lead.

Yellow Billy we didnt get until he was 10 years old - in his previous life he was a gun dog and had never lived in a house before he arrived at Bonners Lodge.  It didnt take him long to settle in and become best friends with Billy and Charlie.

Sadly we lost both of our boys in 2020 but we will always be grateful for the love they gave to us and how good they always were with our guests.

One of our caravan plots was named after them so thought we would leave their bolg so guests staying with us on Biilys Bay know where the name came from. 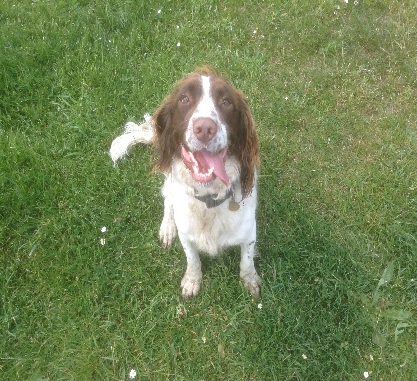 The maddest of spaniels.  Previously a rescue dog which the lady we bought him from had found at the dog pound so we have no early history of his life. His owner was advertising all of her 4 dogs for sale due to moving into a house that did not allow animals.  We went to look at her Labrador to have as a companion for Billy but could not leave Charlie where he was.  It was obvious he had a lot of issues – he was sat guarding the front door just waiting for it to open so he could get out, you just had to look at him and he would roll over and pee himself. We quickly came to the conclusion that the Labrador would easily find a home but Charlie would be the difficult one to place so we just could not leave him behind.  He quickly became best friends with Billy but really wanted to eat Luna our cat. Segregation became part of our life, but over the last year Charlie is starting to realise that the cat actually fights back so is a little hesitant to chase her so often. We only had him for 2 weeks and he snapped his leg when turning sharply trying to keep the ball from Billy.  So £1800 later he had 2 pins in his leg and had to spend 6 weeks in a cage to recover.  We reckon this makes him the most expensive rescue dog ever, but we wouldn’t change him for the world. 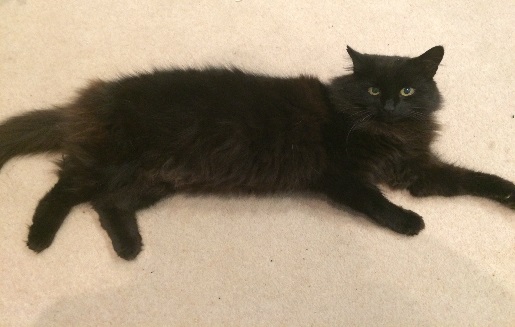 Luna was the only animal we have ever owned from a baby chosen by my daughter when she was 7 years old. Definitely a cat with staff whothought it was her house and we were just the guests. The first 11 years of her life she spent most of her time outdoors and gained the title the terminator due to the number of dead animals found under my daughter’s trampoline every morning. We have lost count of the number of bird’s, rabbits and mice that we have rescued from her in the past. The killing machine lifestyle came to an abrupt end when she was attacked by a red kite and she discovered she was not in fact at the top of the food chain anymore but was part of the food chain!  She had a ripped face, perforated eardrum and a ripped ear which you can still see the tare on her left ear - you could clearly see the talon marks where the Kite had a hold of her face, but lucky for her he must have lost his grip and dropped her. So for months she would only sit under the cover of the pergola in our garden of the last house we lived in.

Unfortunatley we lost Luna in 2017 but thought we would leave her blog in due to another of the caravan plots "Lunas Lair" being named after her. 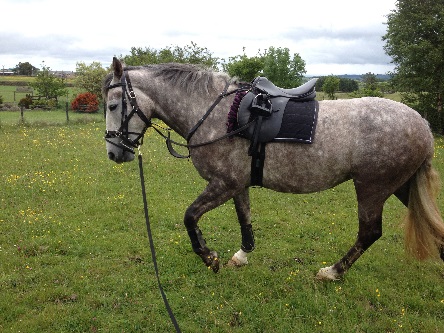 Rosie became a member of our family by default as with all of our animals there is a story: - Firstly I had not owned a horse since my previous horse died at the age of 23 and that was over 10 years ago.  One of the reasons we bought Bonners Lodge was so I could own my own horse again. I was looking for a black 10 year old gelding which was sensible to ride due to me suffering from arthritis in my arms, knee and back so don’t have the strength I used to. A neighbour told me that the local farmer had an Irish sports horse which he was looking for a home for.  She clearly did not fit the bill for the horse I was wanted (grey 4 year old mare) but I offered to look after her for the winter to see if I could manage to look after a horse again. It turned out she had a problem with her throat and had had a tie back operation to stop the sides of her throat collapsing making it difficult for her to breathe. Unfortunately the operation had failed and needed to be redone, again this did not work and a further 2 operations also failed so Rosie ended up having to have a permanent tracheotomy. So by this time I had fallen in love with her lovely nature so could not let her be sold elsewhere – who else would want a horse with a hole in her throat! 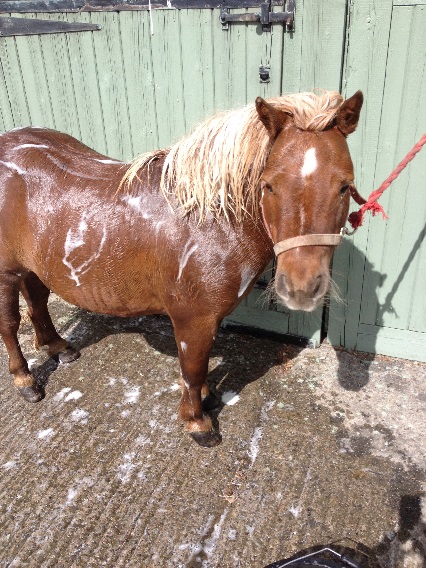 After Rosie had been with us for a few months I received an email out of the blue from a friend I used to work with asking if I knew anybody who wanted a miniature Shetland.  Her father had an allotment and when a neighbouring allotment holder and owner of Rusty became ill he asked if he would look after Rusty for a while.  2 years later Rusty was still sharing the allotment with some chickens and my friend’s dad knew he needed more to his life.  So when I went to see him I couldn’t resist him even though it took a while to just get a halter on him and he came home with us.  He had not had any other horse company for years so was delighted with his new home and friend. Still a stallion he thought he had a chance with Rosie and could not understand that he just was not big enough to be her man.  In his mind he was 17HH! So poor Rusty was gelded but still loves his best friend Rosie.  He settled in very well especially as he was scared of his own shadow.  He is still a bit nervous of new people so please don’t take it personally if he doesn’t come to say hello straight away.  He comes around in his own time. 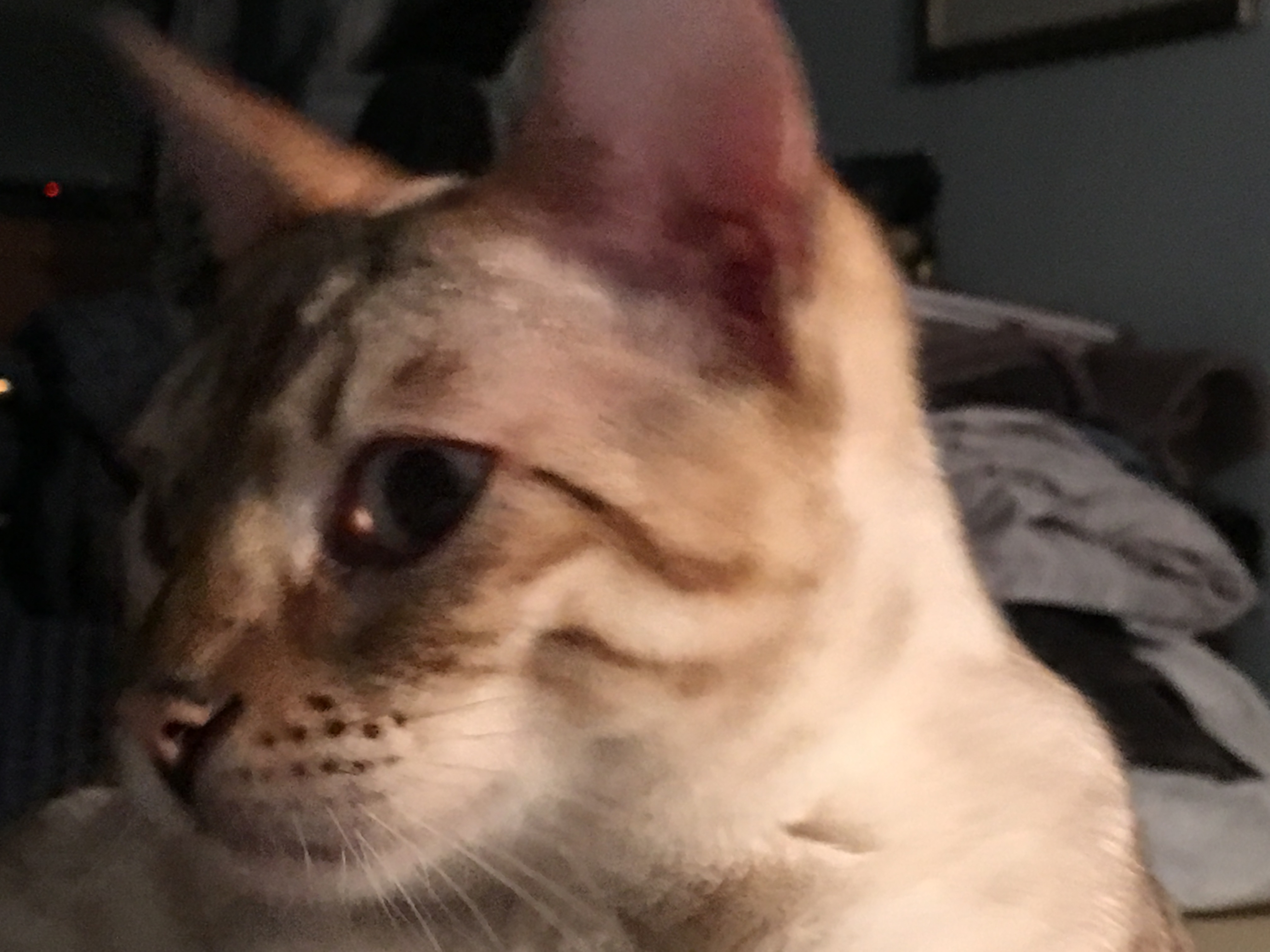 Rafiki our Bengal babe joined our family in 2018 and was an immediate hit winning over our guests even those who dont ordinarily like cats.  He loves performing to an audience and showing off sitting on command and doing high fives for a treat.  He also loves playing fetch with his toys and behaves very much like a dog following us everywhere and he doesn't like being left by himself. 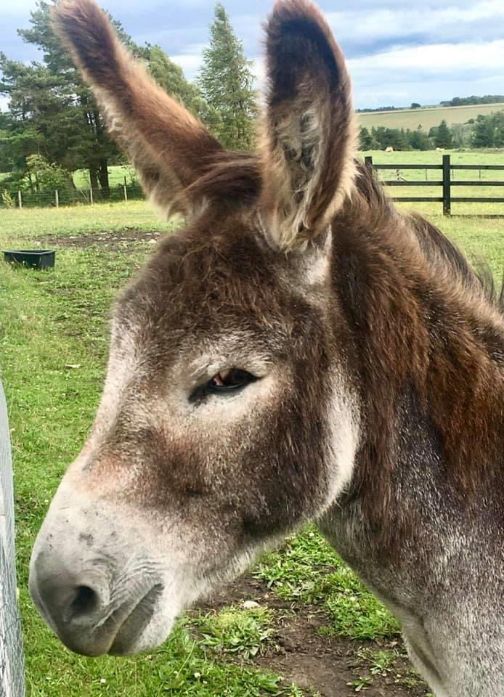 Ray joined us in July 2019 as a six year old.  We bought him from a dealer in Bradford and he was in very poor condition.  He was covered in bites literaly all over his body, his muzzle felt like sandpaper but with alot of love and attention he soon settled in to life at Bonners Lodge.

He loves the attention of our guests and enjoys being brushed and fussed over.  Our guests can have a ride on him when he is in the mood!! The saying as stubborn as a mule is completely true and if Ray doesn't want to do something then he takes a bit of persuading to get going again. 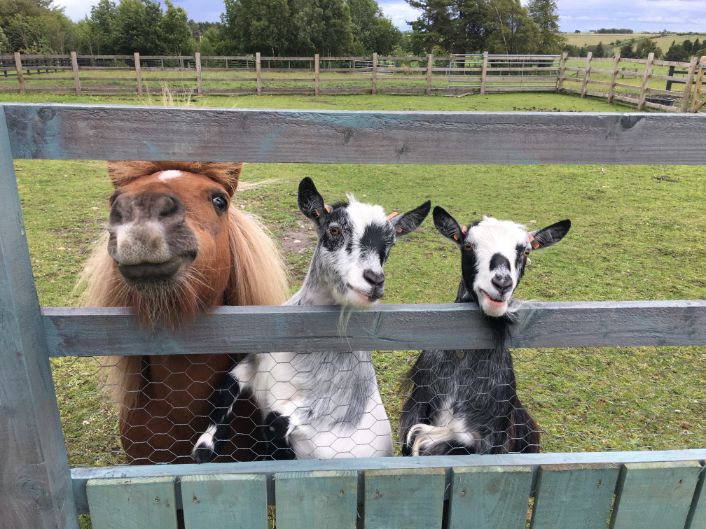 Sally & Sue with their mate Rusty

Sally and Sue joined our family in July 2019 and have become a firm favourite with our guests.  They love being taken into the garden on their leads and having cuddles off everyone.

Ken made them a beautiful enclosure (goat heaven) down in our pixie dell, but we can't leave them their for 2 minutes before they jump the fence.  They would rather be in the paddock with their best friend rusty the shetland and where they can see all of the camping guests. 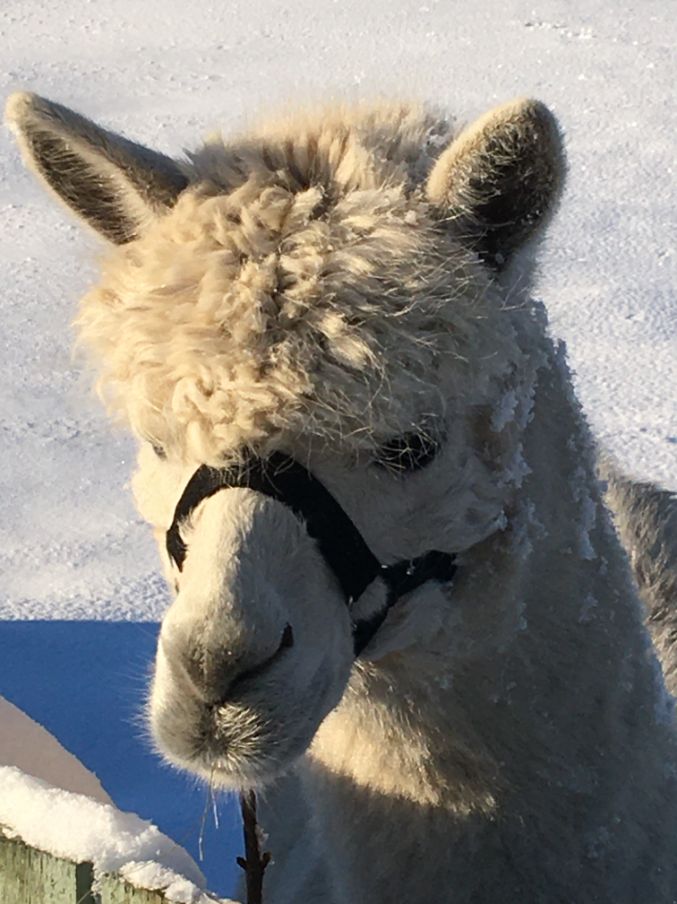 Our 2 alpaca boys joined us in December 20 and quickly adjusted to life at Bonners Lodge. Although they had been handled in the past it was not on a daily basis so it has taken a bit of patience to get them used to having their halters put on every day.  Alpacas are shy by nature so dont take it personally if they dont come over for a cuddle straight away. 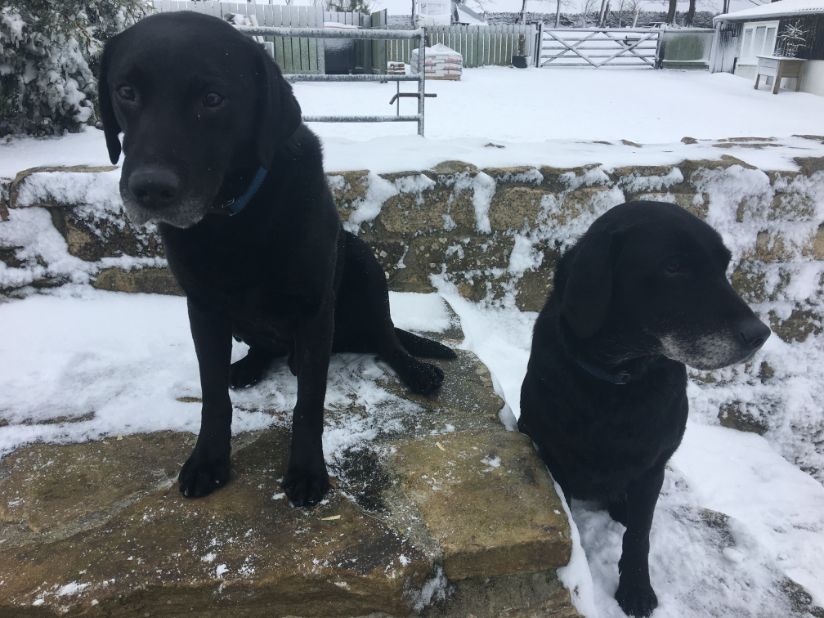 Ten year old Sam & Bess are the newest additions to Bonners Lodge joining us in January 2021.  Charlie had never been without his two best mates Billy and Billy so we had to find him some new friends. Luckily my cousin Maureen knew that the owner of these two beauties was looking for a home for them.  They were formally working dogs and had spent all of their lives living in kennels, but they have quickly adjusted to living in a house. 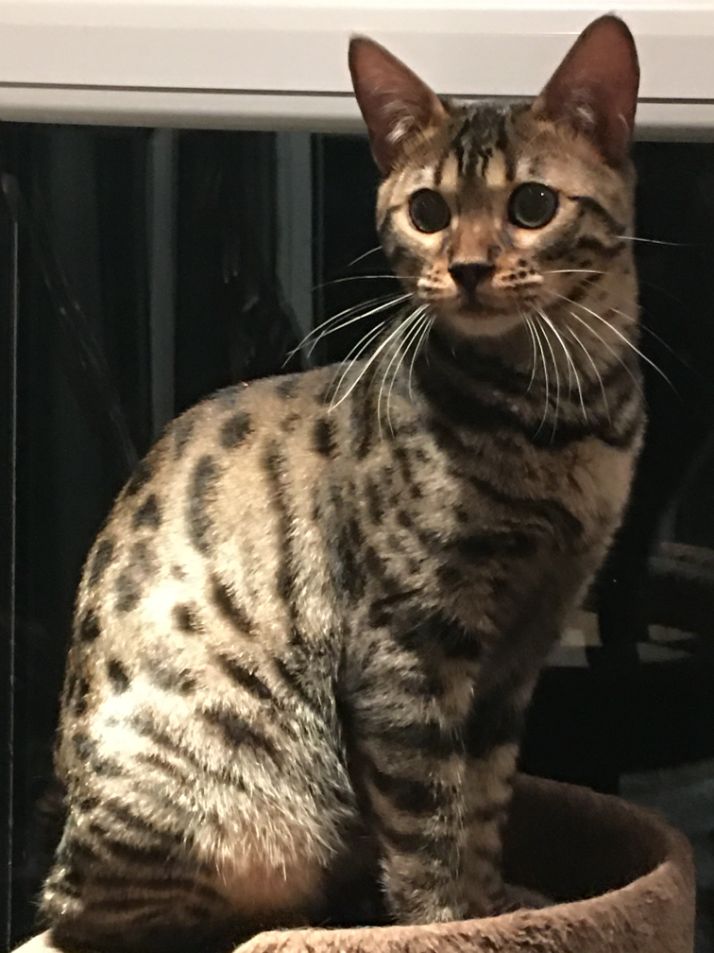 Boots joined our family in October 2020, supposedly as a friend for Rafiki.  Bengal cats do not like being alone and there are times when we have guests staying with us that Raff has to be left by himself for a while so we thought a friend would be good for him.  How wrong could we be Raff wants to kill Boots so we are still trying to intergrate them slowly, so far without any luck 4 months down the line and still no better.  We have followed all of the RSPCA guidelines for introducing two cats to no availe so still a work in progress.